We Don't Use Foam or Fiberglass

​We care about our customers, when we can keep families and business safe from fire and prevent installation of hazardous materials, we are having a successful day! Sure, we could install the seemingly more "popular" products in your home just to make a sale. However, we choose to operate in truth and never compromise our standard of holding your family’s health and safety at the highest level.
​

A.) Hazardous Products of Decomposition
What’s wrong with foam? Well it is a great insulator but it's very hazardous if and when it burns. But will those foam guys tell you that? Well no, the foam contractors likely don't understand exactly what they're dealing with. The manufacture has used the chemical abbreviation instead of being forth coming about spelling out the hazardous chemical. They use the abbreviation in hopes to hide this reality.

If you were to look at the MSDS of foam in 'Section 5: Stability and Reactivity Data'. There's a subsection of 'Hazardous products of decomposition:’ which lists products of foam burned. The first few are expected and are dangerous but could be lived with, but there's the one that isn't spelled out like the rest of them, HCN. Looks like they're trying to deceive us.

​
What's HCN? Hydrogen Cyanide is highly lethal. It takes only 300ppm to kill someone within 8 minutes. That's like taking a tablespoon of it and putting it into a regular size in-ground pool (25,000 gal.), and everyone would be dead in 8 minutes. But that's just that type of foam isn't it? No, all polyisocyanate foams are chemically the same.
​
B.) Extreme Flammability - NFPA 286 Test Spray Foam
In the video above, the National Fire Protection Association put the commonly used spray foam through a fire test. The test only lasted 44 seconds before it reached flashover condition with temperatures around 1900 degrees.

Toxic Spray Foam Leading to Health Problems?
Marketed as "green" and "non-toxic", the SEALECTION spray foam insulation contains two sets of highly toxic compounds which are brought together in a spraying apparatus handled by an installer who applies the material into an attic, wall or similar area of property. When applied, the resulting foam is supposed to become non-toxic. The Demilec lawsuit claims, however, that due to a number of defects, the toxic chemical compounds combine to create a toxic substance which continues to "off-gas" after installation. "Off-gassing" is said to create irritants which can lead to health problems in occupants of homes and buildings with the spray foam insulation. These problems may include:
​ Many of the chemical compounds found in the spray foam insulation are classified as hazardous by OSHA. The plaintiff in the lawsuit had the air in her home tested after the spray foam was installed and claims that elevated levels of formaldehyde and other volatile organic compounds were noted.
​

Fiberglass holds the major market share of the insulation industry, even though it has poor performance and health concerns. White Fiberglass is the most common material used in our area for new construction because it's ultimately the cheapest, so that's why most builders use it. It's cheap because they're able to fluff it extremely well in the attic. It only weighs 0.4LBs per cubic foot installed!

Fiberglass is glass, a very conductive material. On an engineer's conductivity scale, steel is the benchmark at 100 and 0 is nonconductive. Glass is rated at 80 while wood(Cellulose) is rated at only 5. Also fiberglass doesn't stop air from migrating through it, another major reason why it's such a poor performing product.

​Below is a chart illustrating the variable rated R-Value of Cellulose and Fiberglass insulation. 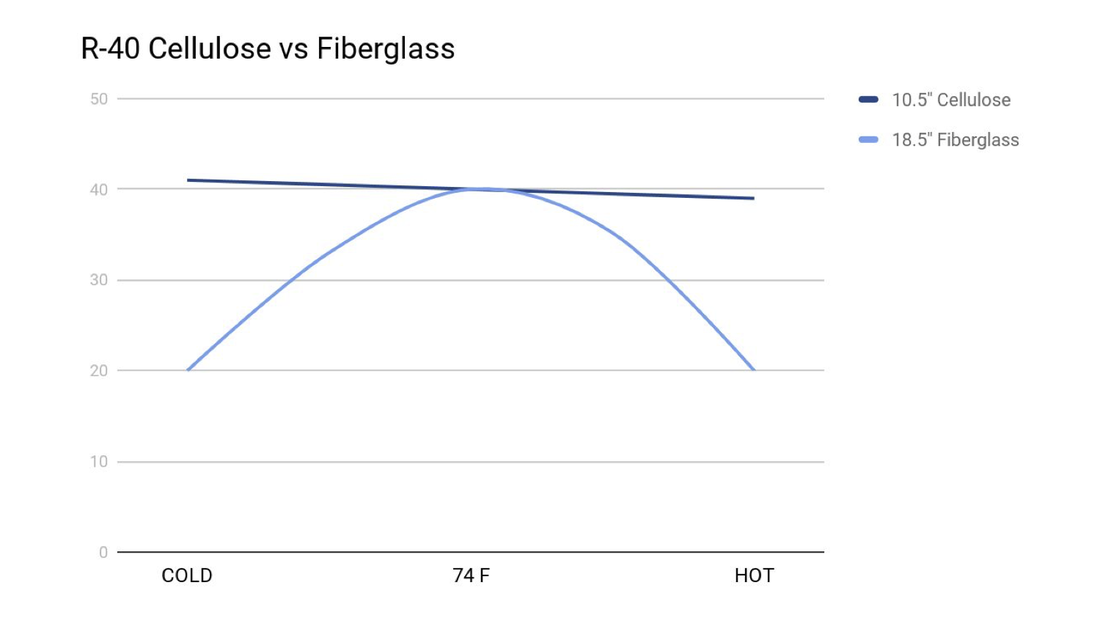 Not only does Fiberglass perform terribly when you need it, it also has a poor R per inch to begin with, only 2.15 per inch. While Cellulose has a very good R per inch at 3.8. This is why it takes over 18 inches to meet the R-40 mark compared to Cellulose at around 10 inches.